It is always an aim of mine, when creating software simulations with Captivate, to make them as true as possible to the real application. But up until recently, I had not thought it possible to simulate mouseover effects (such as tooltips, button effects, highlighting etc.) that often occur in applications prior to clicking.

This week, however, prompted by a request from a training delegate, I investigated and devised a way in which a Rollover Slidelet can be used to provide just such an effect. The reason why it has to be a Rollover Slidelet rather than either of the other two types of Rollover (Caption or Image) is that Rollover Slidelets uniquely enable you to specify an action that will be executed when the user mouses over the rollover area. The trick then is to set this action to be “Go to the next slide”, and to arrange for the next slide to show the required mouseover effect. You specify this action using the following setting within the Properties for the Rollover Slidelet:

Please note that what is labelled on the stage as “Rollover Slidelet” is actually the rollover area that the user has to mouse over, normally to view a Slidelet. The Slidelet itself has no label. It is easy to confuse these two items. 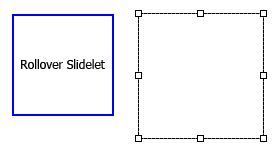 In our case, we don’t actually want a Slidelet to appear — not that the user would see it anyway, because rolling over the Rollover Slidelet will cause the next slide to appear immediately. I actually make the Slidelet invisible by setting its Stroke Width to zero, and its Fill colour to an Alpha value of 0%.

The final step in setting up the effect is that you have to insert an interactive object that will cause the slide to pause — otherwise the slide would move on automatically after its prescribed duration, without the user needing to mouse over the Rollover Slidelet. I do this by inserting a small click box in the corner of the slide. If you want, you can set this click box to pause the slide after a long duration (such as 20 seconds) and display a hint (in the form of a text box or animation) just before this time expires that prompts users to mouse over the Rollover Slidelet.

The overall effect is a very convincing simulation. The only limitation is that, if the user moves their mouse away from the control before clicking, the mouseover effect persists (because the user has progressed beyond the slide that shows the control without the effect). I suppose it might be possible somehow to devise a method for sending the user back to the previous slide when they move their mouse away from the control, but that might be taking realism a stage too far!

We use cookies to improve your browsing experience on our website and to understand where our visitors are coming from. By clicking ‘Accept cookies’, you consent to our use of cookies.
More info Accept